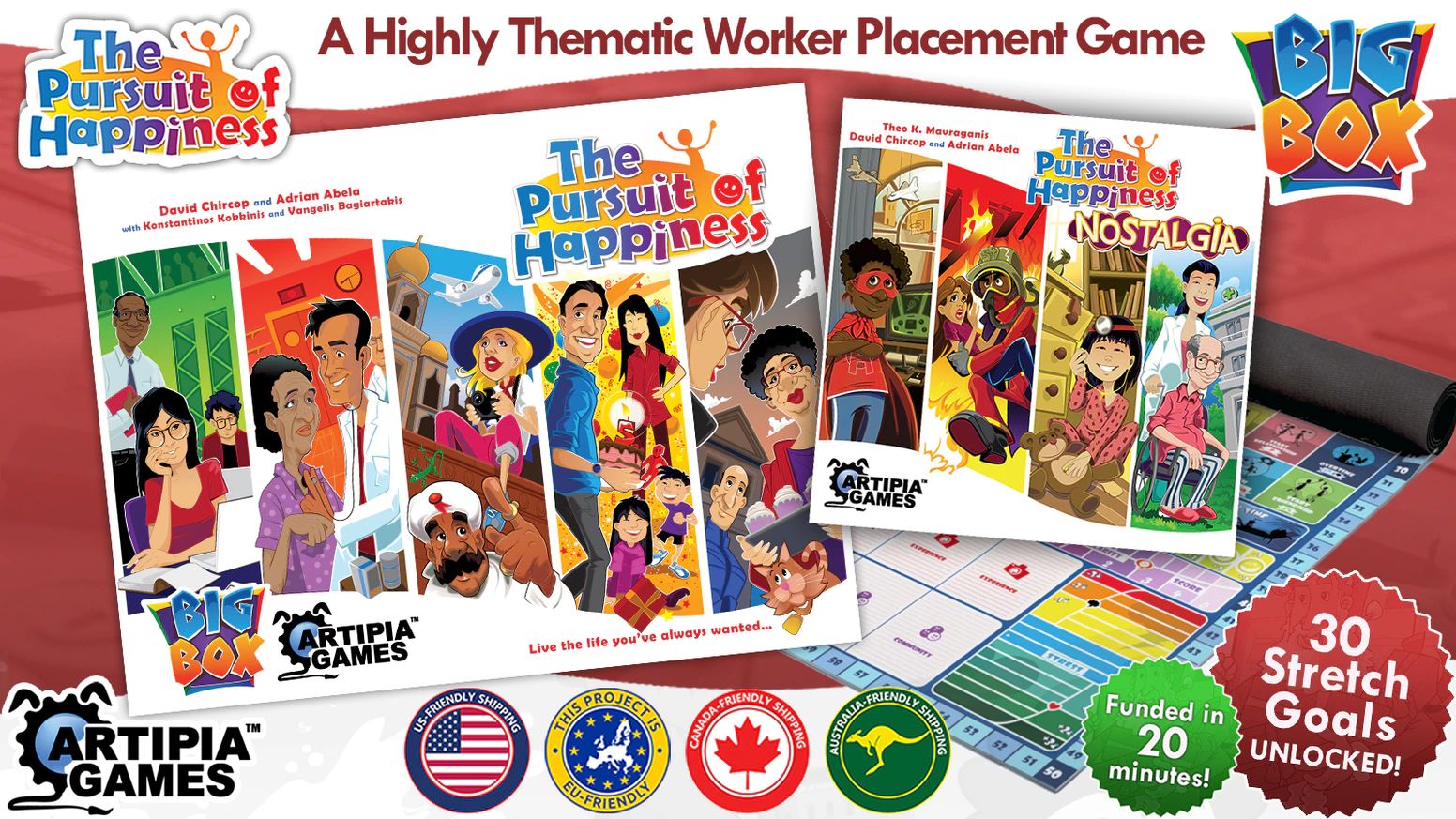 The Pursuit of Happiness - Big Box and Nostalgia expansion

The Pursuit of Happiness Rulebooks:


The Pursuit of Happiness Designers

David Chircop is a board game designer and game developer from Malta, currently living in Poland. He is currently working as a game designer on the video game Cyberpunk 2077. He was the main designer of The Pursuit of Happiness and he has also designed Petrichor, as well as ...And then, we held hands.

Adrian Abela is a software developer from Malta. He develops video games and board games in his free time. He has co-designed The Pursuit of Happiness core game with David Chircop and Vangelis Bagiartakis

Konstantinos Kokkinis is a board game designer from Greece, residing in Athens. He is also the CEO of Artipia Games. Konstantinos has always had a passion for games, both as a player and a designer. He managed to materialize his passion into a job, when he created Artipia Games back in 2011 with his first game Drum Roll. He is also known for Project: ELITE, A Thief’s Fortune, New Dawn and Rush M.D. In The Pursuit of Happiness series, he has co-designed The Pursuit of Happiness: Experiences expansion and has been very much involved in the game development of the whole series.

Vangelis Bagiartakis is a board game designer from Greece and currently lives in Athens. He has studied Physics but games have never left his heart. He has been one of the most prominent contemporary board game designers in Greece, having designed Among the Stars, Dice City, Fields of Green, Freedom and co-designed Kitchen Rush. He is one of the co-designers of The Pursuit of Happiness, main designer of the Community expansion and has been actively engaged with the development of the whole series.

Theo K. Mavraganis is a board game designer from Greece, currently living in Athens. Always following a thematic approach to his game designs, he is giving himself wholeheartedly to each and every one of them, on his quest to create memorable gaming experiences. He has designed Whoosh: Bounty Hunters and he is the lead designer of The Pursuit of Happiness: Nostalgia expansion.

In the pledge manager, that you will get access to after the campaign ends, there will be an option for Essen Spiel 2021 Pick-up with no shipping cost.

A few days before the fair you will receive a unique code via email with which you will be able to collect your pledge from Artipia Games booth (14-17th October 2021, Spiel 2021 Essen, Germany).

In case the Essen Spiel 2021 doesn't take place due to any reasons, we will individually contact all Essen Spiel '21 backers and arrange the collection of the shipping costs that correspond on their shipping address, after the completion of the Pledge Manager.