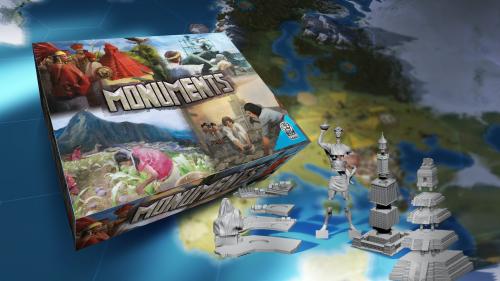 It is your goal to build your Monument as fast you can, but you can’t neglect your empire and your people. The game ends after the round in which one player finishes their Monument, but only the player with the most Victory Points wins the game!

For extensive game play overview, please find video reviews, gifs, the rules and other resources below, but in short, this is how Monuments is played:

Each player has the same set of 10 action cards, which can be upgraded over the course of the game for superior actions.

On your turn, either play an action card from your hand, perform the action on it, and then discard the card, OR take all discarded cards back on hand.

Because the majority of action cards are very simple and straight forward (move 2 units, produce on 2 hexes, add a worker to the board, etc), game play is very fast and smooth and downtime between turns is minimal.

Monuments sets itself apart by the XXL models of up to 15 cm (6 inch) (!) tall, and the amazingly detailed artwork on the game board.


We are currently still developing the Deluxe game trays. When backing Deluxe or Super Deluxe, you will receive:

With these trays, setup and cleanup will go fast, and you always have your components handy organized in front of you.

We hope to provide you with more work in progress pictures as the campaign progresses!


Here is a close-up look of the Super Deluxe resources:

Here is a close-up of the Deluxe wooden silk screen resources and player pieces:

On your turn, you either play one of your 10 action cards or take the played cards back on hand;

Basic actions include movement and production;

This ultimately leads to the building of your Monument;

Unfiltered Gamer both did a review and a full playthrough of Monuments. The review:

The Hungry Gamer takes a look at the solo mode.

You can find the rules for the multiplayer game here and for the solo game here. Please note that in the rules, Tabletopia and  video reviews, you will find old versions of card design and several other components.


Don't take our word for it, try it yourself! You can play both the multiplayer (2-4 players) and the solo modus on Tabletopia.

You can add-on more copies of the game and copies of our previous games in the Pledge Manager. Our previous games are: Scuba, The Dutch East Indies with its expansion Adventures on the High Seas, Tour Operator, Tikal, Mexica, Cuzco, Old Masters and Mississippi Queen.

Keep Exploring Games is the lead publisher for Monuments. We are known for Scuba, The Dutch East Indies and Tour Operator, as well as localizing such games as Tikal, Mexica, Cuzco, Mississippi Queen and Old Masters in Dutch, German and/or English. For this project, we will only produce the Dutch and English versions of Monuments and in part the German version. We are working together with partners in different countries to localize the game in their language. Speaking of which, our team is also very much international;