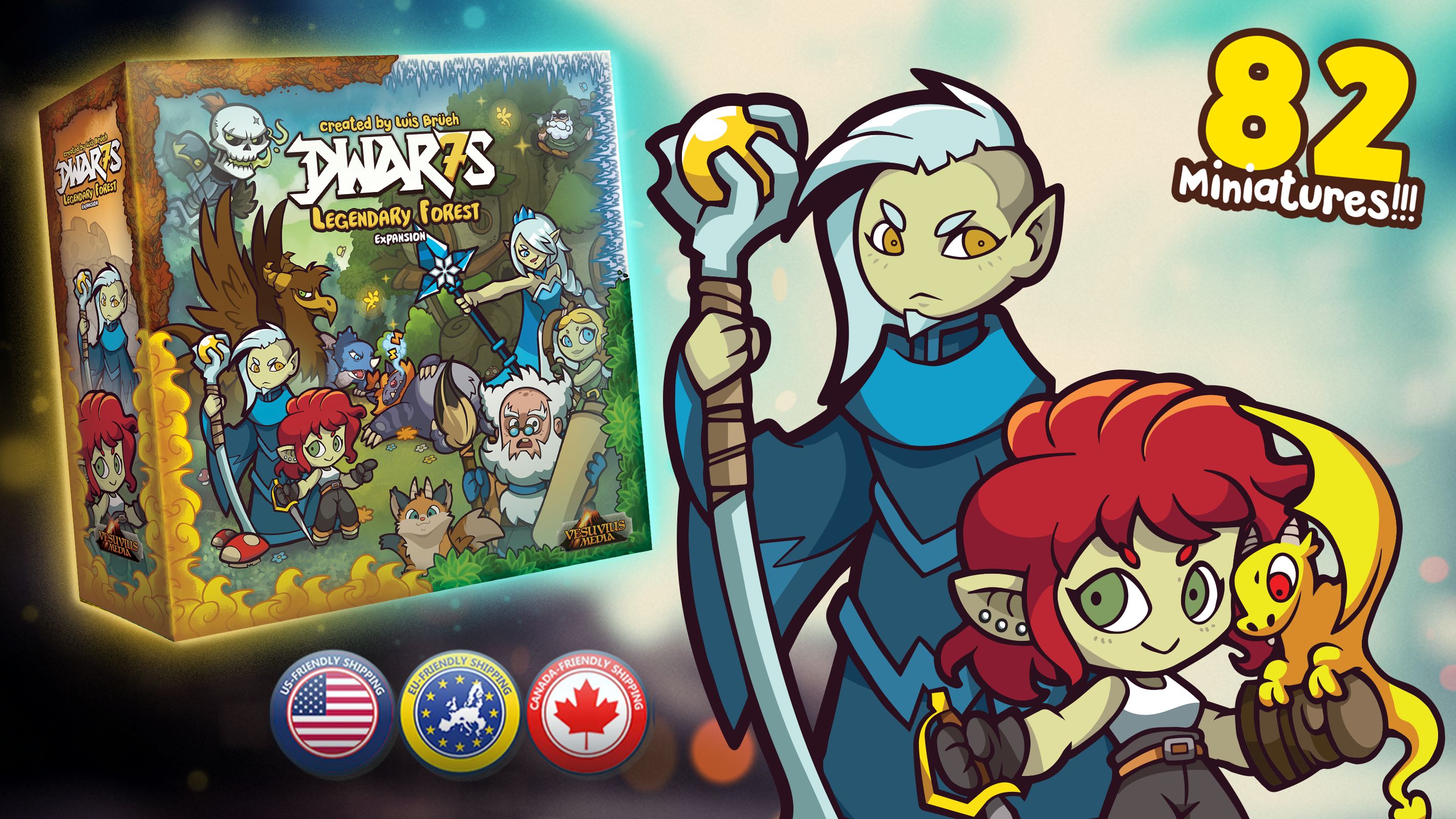 Now that you survived winter, and you have successfully defended your kingdom, it is time to expand your empire by exploring the world and building settlements.

Beware! Monsters are lurking around every corner.

You will need to enlist mighty heroes to empower your ranks and defeat the monsters.


Last but not least, you will need to find rare dragon eggs, hatch them, and train your dragons to become formidable companions.

With the help of an army of heroes, you will save the faeries and use their magic to explore the world and build a mighty empire!

Spring is upon us! As the flowers blossom, empires will rise!

All Dwar7s games are language independent. The cards have no text. As such, with just the rulebook you will be able to play the game in all supported languages.

Inside the game's box, the rulebook will be in English. However, through our website (http://www.vesuviusmedia.com) or the Hive Portal (http://www.hiveinteractive.net) you will be able to download the rulebook for the core game and its expansions in several supported languages: English, Portuguese, French, German, and Spanish.

For the Core Game of Dwar7s Spring, you can already download the PDF files in numerous languages here:


Learn how to play by watching the following video:

For the Core Game of Dwar7s Spring, you can already download the PDF files in numerous languages here:


What's inside the Legendary Forest Expansion?

The Legendary Forest Expansion includes the content of the former expansions listed below:

Also it includes the new Snow White Miniature (can be used as First Player Token in Spring, as part of the Snow White and the Witch variation in Fall) and updated rulebook for all of the above content!

We do not plan to re-print any of the above expansions individually in the future. They will only be part of the Legendary Forest Expansion.

If you are a returning backer or you have the expansions listed above, you can get the big box (empty with just the plastic tray in it), plus the Snow White Mini, the updated rules and the new content from this campaign by choosing the "Returning Backer" pledge. In addition, if you are missing content (eg. one of the expansions listed above), you will have the option to add them in the Pledge Manager after the campaign.

We will charge shipping after the Kickstarter concludes based on the actual costs incurred to ship. Payment will be collected via the Hive Pledge Manager (https://www.hiveinteractive.net) after the campaign. Shipping costs vary widely based on where you will receive your reward. Unfortunately, a one size fits all price isn't manageable.

As you may have seen in other Kickstarter campaigns, the requirements for remitting Value Added Tax (VAT) in Europe have changed. Therefore, after the campaign, in the pledge manager, backers in Europe will be charged a portion (10% to 15%) of the relevant VAT for their location. We will cover the remaining amount.

For backers in the UK, since Brexit, VAT charges on import are also incurred. Therefore, after the campaign, in the pledge manager, backers in the UK will be charged a portion of the VAT (10% to 15%). We will cover the remaining amount.

Vesuvius Media has successfully Kickstarted sixteen (16) projects. To date, fifteen projects have been produced and delivered. Its most recent Kickstarter project is currently in production and scheduled for delivery in September 2022.