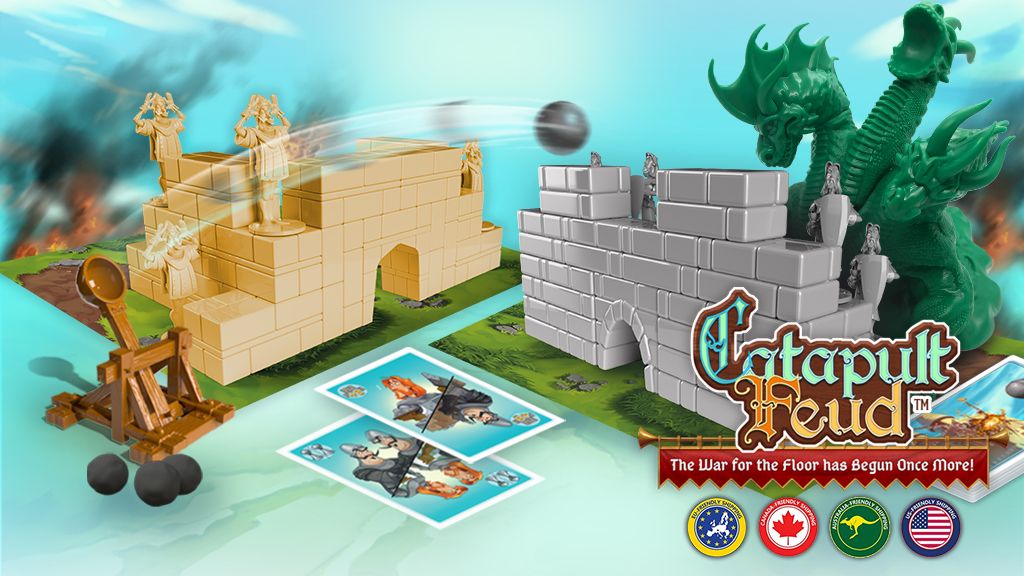 During this campaign, we will be using the Stretch Goals to create a Kickstarter Exclusive Brick Pack, the Architect's Pack. This brick pack will allow you to be even more creative with your castle designs!

This pack will be included with all pledge Levels (of value $30 or more), and only with the "4-Player Upgrade Pack", "Extra Deluxe Edition", and "Extra 2-Player Bundle" add-ons. During the campaign there is no option to get additional Architect's Packs individually, but you will have this option in our Pledge Manager.

You can see its content in the image below:

Add some holiday fun to your castle smashing!

During setup at the beginning of the game, each player places one or two Tree ammo piece(s) on the highest viable place(s) on their castle. If/when the ammo piece(s) fall or are knocked off, the player whose tree fell gets to fire it at the attacking opponent in retribution for such an unceremonial felling of the festive tree. When firing it at your opponent, players are encouraged to cry "Tannenbaum!!!".

Tannenbaum!!! was the winner of our Catapult Feud Holiday Ammo Competition! Thank you to everyone who entered andvoted, and to Paul B for the awesome idea!

Back this campaign ($30 or more) in the first 72 hours and you will receive the Holiday Ammunition pack for FREE!

From the runner up (Geoffry H.) of the Holiday Ammo Competition, comes another fun element to our game!

Launch a Secret Santa gift at your opponent's castle. In addition to any damage, if the ammo lands inside their castle, the closest troop (max distance of 4 from the gift) picks it up and opens the gift. They are so moved by the kindness of the gesture that they decide to switch teams! Remove that troop from the enemy's castle, get a troop matching your color from the box and place them following the Troop Placement rules in your castle!

Back this campaign ($30 or more) before it ends and you will receive the Secret Santa pack for FREE!

After the campaign ends, the pack will be available as an add-on for $10 in our Pledge Manager.

This special ammo is included in the Artificer's Tower Expansion.

Instead of a boulder, load your weapon with a beehive! If you hit any of your opponent’s bricks, the beehive "breaks open" and the bees chase their troops. Move up to 3 of your opponent’s troops to new valid locations, following the Troop Placement Rules.

Depending on the side it lands, there are 3 possible outcomes:

This mini-expansion introduces a new game mode, the Royals, and a new ammo type, the Smelly Fish.

When you load and launch a Smelly Fish at your opponent's castle, in addition to any damage it may deal, if the Smelly Fish lands at a distance of 2 or less from any troop, those troops faint from the stench and they are removed from the game!!!

The special yellow ring can be added to the base of one of your troops to make that troop Royal. The Royal Troop has to be removed from play last! If they are knocked down during the game, and they are not the last troop standing, then they get back up and the play continues.


Whether you're smashing castles with Catapult Kingdoms or Catapult Feud, it's the same catapult launching fun, just under a slightly different name.

FYI Catapult Kingdoms successfully funded on Kickstarter in July 2020 and was delivered to over 5750 backers. As the game grew in popularity, we applied for the Trademark TM. Catapult Kingdoms wasn't available all of our markets, but luckily, Catapult Feud was! The new name highlights the story between the feuding families!

Anything marked with the "Kickstarter Exclusive" badge will only be produced as part of a Kickstarter campaign production. After the campaign, any remaining stock may be available through Vesuvius Media webshop or at a convention exhibit booth.

We have publishing agreements for the base game in many different countries. Some of our partners have also chosen to publish, in limited quantities, some of the expansions. These items are marked with the badge "Limited Retail".

One game, so many ways to play!


In this mode, simply forget the rules! Do not use any action cards, build your castle any way you see fit within your player board, and then place your troops on top of the bricks. Take turns shooting boulders at each other until you have a winner!


To play in Strategy Mode, follow the rules as described in the rulebook.


Set up your game as if you were going to play the Quick Play Mode. Then, instead of taking turns launching boulders at each other, start shooting simultaneously as fast as you can! You will need to chase boulders, reload, and shoot again!

If all your troops are knocked down, then you are out! The winner is the player with the last troop standing!


Inside the Siege Expansion, you will find a really cool game mode called "The Siege"!

In this game mode, instead of each player building their own castle, you build one big castle in the middle of the floor. Once the big castle is built, take turns trying to knock down troops and bricks, earning points based on your performance!

If you have a second base game, you can play with more than two players. In the image below, you can see the setup for a 3-Player Game. You can play using any of the above game modes!

If you have a second base game, you can play with more than two players. In the image below, you can see the setup for a 4-Player Game. You can play using any of the above game modes!

Let your imagination go wild and create your own game modes! Share them with us in the comments section of this campaign, so that others can play and be inspired too!

We will charge shipping after the Kickstarter concludes based on the actual costs incurred to ship. Payment will be collected via our Hive Pledge Manager (https://www.hiveinteractive.net) after the campaign. Shipping costs vary widely based on where you will receive your reward. Unfortunately, a one size fits all price isn't manageable.

We expect the shipping box for the Deluxe Edition to be 29 cm x 29 cm x 35 cm and weigh around 4 kilograms. The 2-Player Bundle will probably ship in two boxes because of its size! The estimated shipping rates, which are based on these assumptions, are shown in the table above.

Vesuvius Media has successfully Kickstarted fifteen (15) projects. To date, fourteen projects have been produced and delivered. Its most recent Kickstarter project is currently in production and scheduled for delivery in spring 2022.